Bringing them back from the brink of extinction

Looking for the webinar?

Island Elephants: The Giants of Sumatra by Dr Alexander Mossbrucker 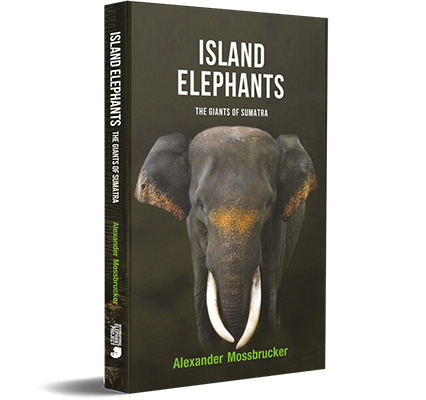 Since 2008, Dr Alexander Mossbrucker, International Elephant Project Field Manager, has devoted his life to studying and protecting the Sumatran elephant (Elephas maximum sumatranus), the most endangered of all Asian elephant species.

In his new book Island Elephants: The Giants of Sumatra, Alex offers a rare insight into the Critically Endangered Sumatran elephant and the urgent steps being taken to secure its future in the wild.

Beginning with a unique excursion into the world of elephants before developing into a detailed compilation of the latest biological research and monitoring in best practice conservation methodologies, Island Elephant provides an in-depth, highly researched approach to protecting the Critically Endangered Sumatran elephant in its natural habitat.

The book is structured in such a way as to represent a good source of information for those concerned about the fate of this extraordinary animal, with future Indonesian conservationists particularly in focus.

Dr Alexander Mossbrucker joined the International Elephant Project (IEP) in 2012 as a voluntary advisor, and in January 2021 became IEP’s full-time field manager. He is a trained biologist who has studied at several universities in Germany, Panama and Indonesia. Over the past ten years, much of his professional career has focused on ranger patrol management, wildlife monitoring, and human-wildlife conflict management. Alex is the Founder and President of the Sumatran Elephant Conservation Initiative (SECI), and he has authored several scientific publications, including a field guide to Sumatran mammals.

Register for one of our live webinars as we explore what led Alex to write his book, his work with the International Elephant Project, and what the future holds for the Critically Endangered Sumatran Elephant.

Hosted by Leif Cocks, President of The Orangutan Project, each webinar will run for approximately 45 minutes including Q&A. Feel free to ask questions in the chat.