The Asian elephant is the largest land mammal on the Asian continent. Currently, Asian elephants live in 13 countries - Bangladesh, Bhutan, Cambodia, China, India, Indonesia, Laos, Malaysia, Myanmar, Nepal, Sri Lanka, Thailand, and Vietnam. Asian elephant numbers have plummeted in the wild due to massive habitat destruction and poaching. The overall population is estimated to be between 30,000 – 50,000 elephants. The Asian elephant family consists of the Bornean, Indian, Sri Lankan and Sumatran elephants. They are considered forest animals, however they often prefer habitat that includes more open spaces containing a greater variety of plants including grasses to feed on. Elephants have migratory routes to allow them to find habitat that has enough vegetation and water sources to meet their needs. Asian elephants have home ranges and the sizes of these will vary depending on the amount and quality of food available and the presence of other elephants in the area.

Asian elephants are very sociable and highly intelligent with a great capacity for learning. They typically live in small herds of related females, their offspring, and immature males. They will sometimes join other herds for a period of time and group sizes have then been observed at over 60 individuals in some areas. Male elephants generally leave the herd between the ages of 8 and 13 and this is often a gradual process. When they leave their herd, they regularly form loose bachelor herds with other young males. As they age, they become more competitive and spend more time alone. 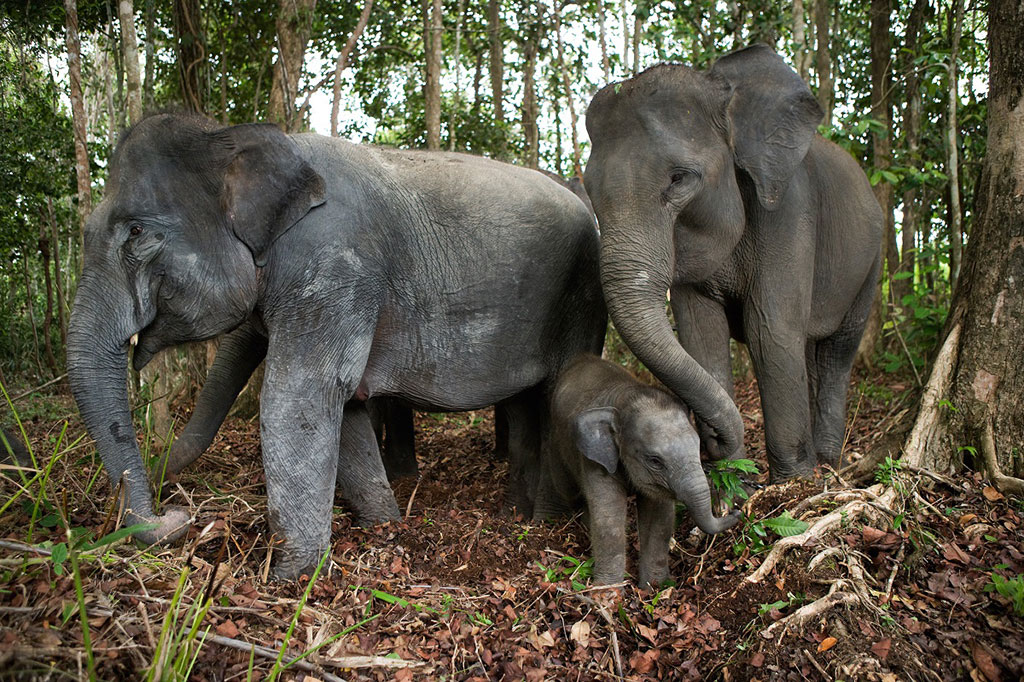 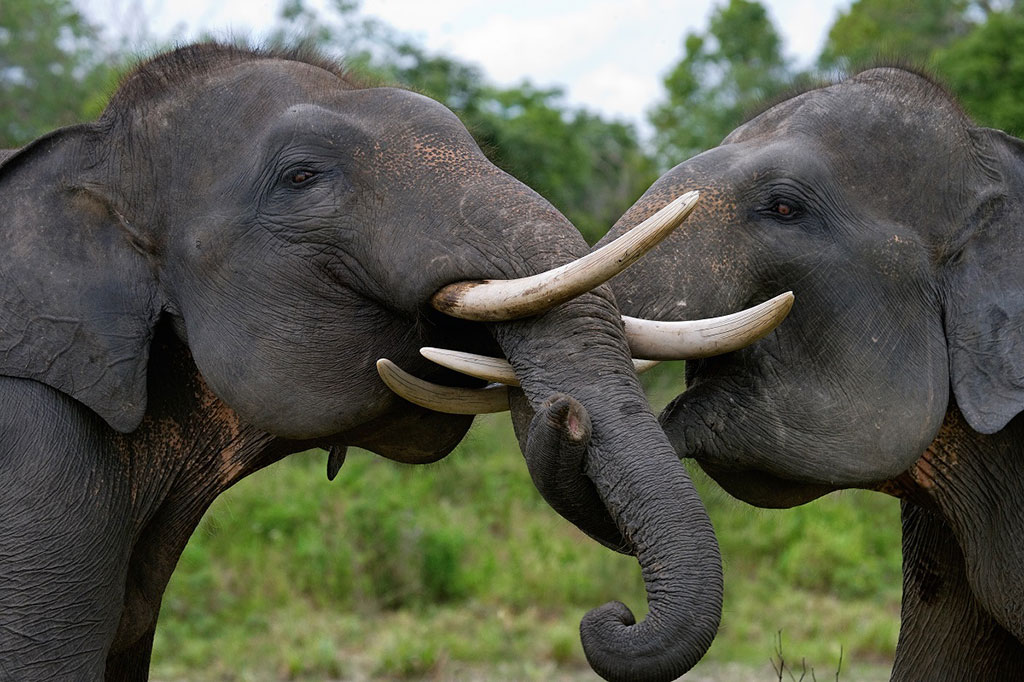 Asian elephants are smaller than African elephants, with noticeably smaller ears. Adult males are larger than females. Asian elephants have grey skin. It varies from paper thin in some places such as the inside of the ears to as thick as over 2cm on other parts of the body including their backs. Young elephants have reddish brown hair covering their bodies that diminishes with age. Elephants protect their skin from the sun and insects by covering themselves with dirt, sand, and mud throughout the day. Their large ears contain many blood vessels. On a hot day, elephants will flap their ears. The breeze then causes the blood in these veins to cool. As the blood travels through the body, the body temperature can be reduced considerably.
Elephants have large brains, weighing between 4-6kg and they are highly intelligent, sentient beings. Much of their behaviour is learned behaviour and not instinctive. The strong, vertical legs of elephants allow them to stand for long periods of time without using much energy. Elephants can sleep whilst standing. Elephants walk on their toes and have a thick, fibrous pad on each foot that cushions each step.
The trunk is a fusion of the nose and upper lip. It does not contain any bones, but is composed of thousands of muscles, as well as blood vessels, hair, skin, and bristles. The trunk is a highly versatile tool and is used to smell, breathe, touch, lift, grasp, feed, snorkel, sift and to produce sound to communicate. The trunk can hold over five litres of water and this can be sprayed over their body to help with bathing and cooling.
Asian elephants have six sets of teeth, all of which are present in the skull at birth. Tusks are modified upper incisors that are made of ivory. Not all elephants develop visible tusks and only some Asian elephant males have obvious tusks. Most females and some male Asian elephants have small tusks, called tushes. Tushes have a slightly different composition to tusks and can break quite easily.

Asian elephants are herbivores and spend approximately three-quarters of each day eating or traveling to find food and water. Elephants will usually rest during the hottest part of the day and feed more in the morning, late afternoon, and evening. They mostly feed on grasses however they also eat a large amount of tree bark, leaves, roots, vines, and fruit. Asian elephants play a vital role in the ecosystem as they disperse many seeds in their faeces as they travel. Elephants are always close to a water source as they need to drink every day. 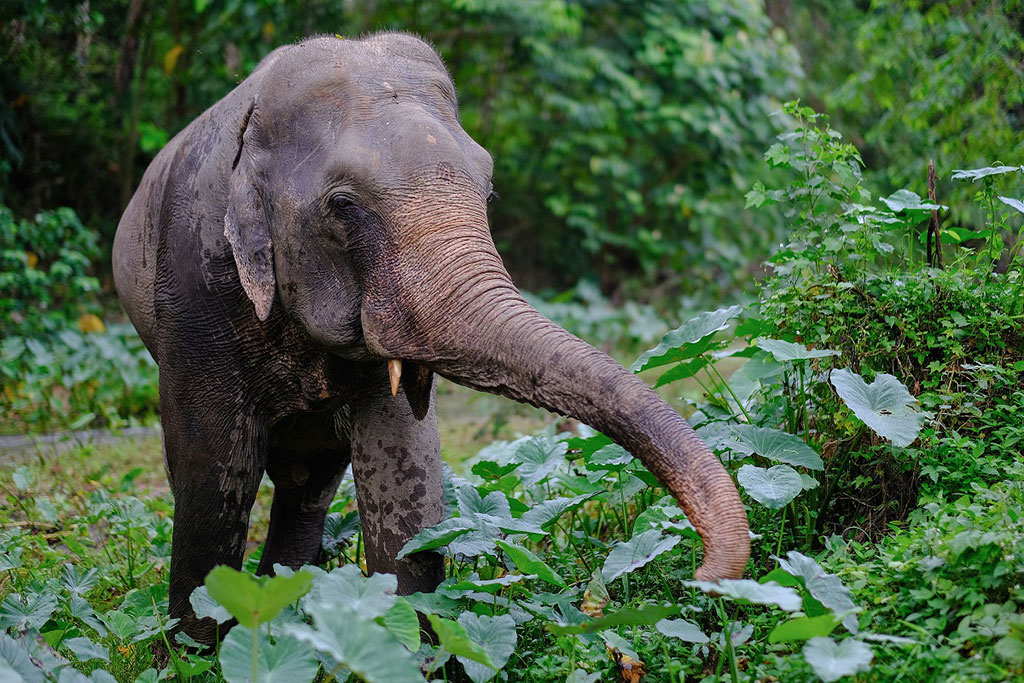 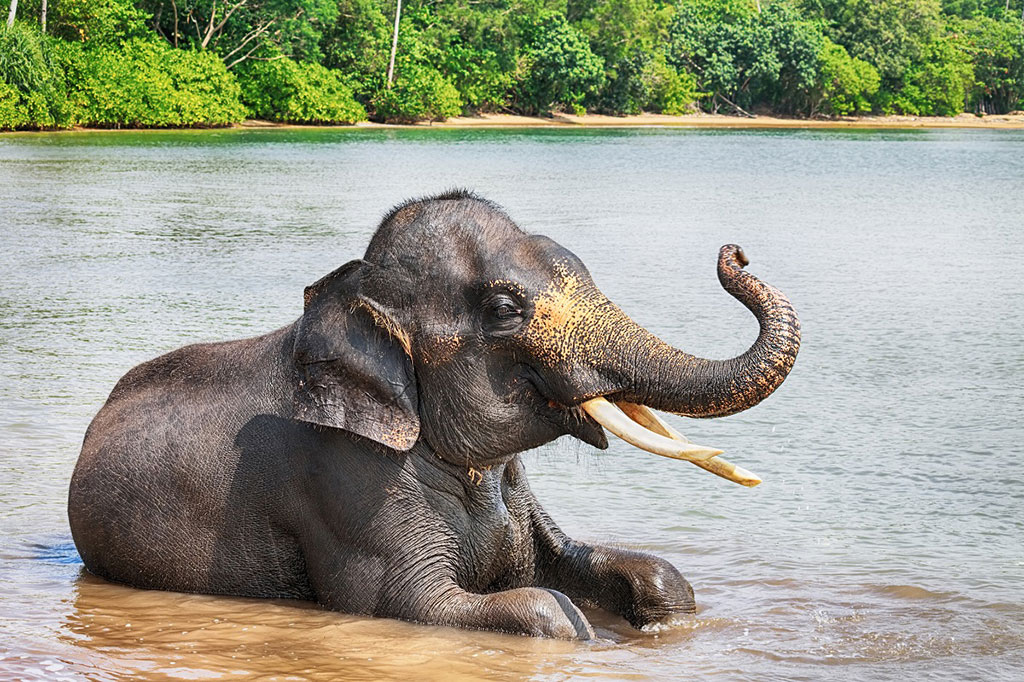 Elephants communicate over long distances using low-pitched sounds that can be heard over 3km away. This communication is important for elephant survival. Females in oestrous make specific vocalisations that bulls can follow, and warnings can also be given about predators that are a risk to young calves. When a predator is in sight, adult elephants will emit loud warning calls that prompt the herd to huddle closely together with the youngsters in the middle for protection. Scent is also an important communication method used by elephants and they have a highly developed olfactory system.
Elephants are very tactile creatures, and the trunk is especially important for this form of communication. Elephants will touch each other regularly to communicate different messages and feelings including excitement, dominance, and their reproductive status